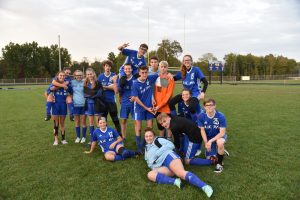 The Blue Jays played McDonald at home Monday evening.  The Jays scored early on a corner kick from Kylee Fetkovich to Noah Davis with a header.  The Blue Jays controlled the pace of the game, dominating possession.  With 2 seconds left on the clock, Kylee Fetkovich scored on a cross from James Simkins.  The Jays were up 2-0 at half.  In the second half the Blue Jays continued to control the tempo of the game.  Their third goal came on a strong strike by Maddie Moore.  The Blue Jays had so many great opportunities throughout the second half as well, with several shots on goal.  For the final goal, Noah Davis crashed the net as Bianca Gancarz ripped a left footed shot.  The goalie deflected it and Noah cleaned it up.

After the game the McDonald Coach came over to congratulate our team on the vast improvement since we faced them last.  She praised the kids on their passing game and shared many encouraging observations.  This win means so much to the Jays as this is the first home game win the team has had in several years.  This was a great team effort by all the players.  The coaches are proud of the kids for continuing to put in the effort to improve our teamwork and speed of play.

The Team will play Columbiana at home on Thursday evening at 5pm, and then Wellsville at home on Saturday morning at 10am, to round out the regular season.  The Jays travel to Newton Falls next week for game one of the tournament.